Do I Still Have the Receipt?  You’re Kidding....Right?

Years ago while shopping, I noticed my 18-month-old was barefoot.  She hated shoes, and somewhere among the aisles she had shed her Barney sandals, bought at the same store a month before.

Granted, Velcro is the greatest invention of the 21st century—how else would one secure the fly of men’s swim trunks?  However, Velcro on kids’ footwear was the bane of my existence.  Easy on, easy off.

We could’t find the sandals, and we were late meeting friends at the zoo.  So we hit the shoe department to buy something cheap.

I saw a pair of Barney sandals just like my daughter’s.  Same size.  They even had my dog’s teeth marks on the sole.  An employee must have put them back on the shelf, thinking they were new.

I could’ve walked out with the shoes, but a blue-haired clerk was watching me like Lindsey Lohan in a jewelry store.  She resembled Maxine, the grumpy old lady on greeting cards.  Since she’d raised children before the miracle of hook-and-loop technology, she didn’t understand my frustration at a toddler unstrapping her Velcro shoes 83 times a day. 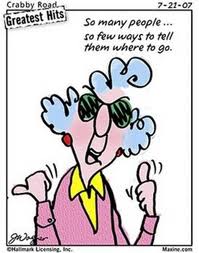 Chuckling, I recounted the incident to Maxine.  Frowning, she asked me for the receipt.

She assessed my baggy sweatpants and yesterday’s mascara and shot me a “that’s-what-they-all-say” look.  If I had a dime for every time I’ve seen that condescending look, I’d slap a For Sale sign on the kids, board a plane incognito, and relinquish my muscles to the capable hands of some Italian masseuse.

After I'd originally bought the shoes, I remembered the receipt falling out of my purse in the store’s bathroom.  My three-year-old got on her knees and sucked it up with her lips like a vacuum cleaner.  My expression of sheer horror didn’t scare her.  She’d seen that look on my face a million times when the grocery store was out of my favorite crullers.  She crammed the dirty ticket back in my purse. 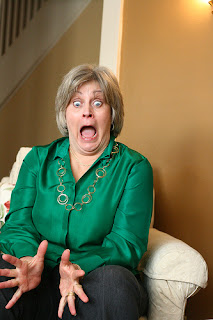 During my conversation with Maxine, my preschoolers ran amok pointing at all the sales associates, like Donald Trump from The Apprentice, and yelling, “You’re fired!”

Maxine, judging me mercilessly over her reading glasses, told me to take the shoes off my daughter and take my children outside where they belong.

Really?  With that comment, Maxine was officially up in my bizness, seriously underestimating my “back-in-your-face” skills.

“Oh, wait, I think I do have the receipt,” I said, gingerly pulling it out of my purse along with the hand sanitizer.  “My daughter sucked it up off the store’s bathroom floor.”  I added nonchalantly, “She says it has brown spots on it because she’d been eating from the Nutella jar that we’d just bought.  But I can’t be sure.”

I pushed the receipt into her hand where it stuck like Velcro.  My crew and our Barney sandals swaggered away. 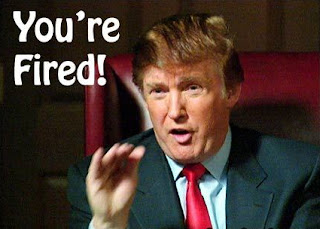 I thought I delivered a pretty clever payback, if I do say so myself.  I bet Donald Trump would love me on The Apprentice.
Posted by The Frazzled Mom at 8:52 AM