“Take her down, Missy Rae!  She ain’t nothin’ but a beat down skank!  And so’s her mama!”  And that’s why I’m no longer welcome at my daughter’s soccer games.

Praise God that I am not addicted to looking at inappropriate pictures on beefcakes.com.  Thank you, Lord, I don’t have that cross to bear like Pastor Dale and his wife, Niecy.  And that’s why I am no longer welcome to be a member of the End of Ages Holy House of Angels on Fire “praise team.”

“Why don’t you “prissies” just lighten up and get your freak on!” And that’s why I am no longer welcome to attend PTA meetings anymore.

“C’mon Booger Bear, let’s streak through the hot wax!”  And that’s why I am no longer welcome at the Speedy Kwik car wash.

“Hello, officer.  I just love a man in uniform.  The PTA sent me to demonstrate to you all the serious infractions that continually occur underneath the bleachers.”  And that’s why I’m no longer welcome to talk to the security guard at school.

“My homemade powdered Kool-aid is not ‘happy powder’ that I sell from my house.  It’s actually a completely legal anesthetic I offer my clients, I mean friends, at my botox parties.”  And that’s why I’m no longer welcome to be a member of the Homeowner’s Association.

“Give me something that says ‘trailer park edgy,’ sort of like all the hootchies who work here.”  And that’s why I am no longer welcome at Mr. Pierre’s Welcome to My Weave Hair Salon.

Lifeguard:  “Ma’am, it’s not acceptable to scream, ‘Oh my gosh!!  How many scabs and poops can I find in one pool??’ in order to clear everyone out so you can have the Lazy River all to yourself.”  And that’s why I’m no longer welcome at the water park.

“Attached you will find my picture and info that I’m sending to the twelve drag queens on your site offering to be their baby daddies.”  And that’s why I’m no longer welcome to email Craigslist, pretending to be Bo Needleman, our nimrod pool contractor.

“This year our theme is “Underbelly of New Orleans! Raise your hand if you want to bring the voodoo dolls and sacrifice the live chicken!”  And that’s why I’m no longer welcome to head up the school auction.

My Virtual Conversations With Bradley Cooper

My Virtual Conversations With Bradley Cooper

My birthday was this week, and things are sagging—my body AND brain.

You’d think our brains would improve since they get fuller with time.  Not so.  Time has sabotaged my ability to clearly communicate without fumbling for the names of my children and/or everyday objects.

I’ve developed a boat-load of stupid this year.  Maybe it’s my addiction to romantic comedies.

I watched one on my laptop last week, snuggled in my La-z-boy and wearing my earphones.  I used earphones because I didn’t want my kids to bother me as I engaged in flirty internal dialogue with Bradley Cooper.

I was blissfully engrossed in his facial stubble when my daughter interrupted me.

In my best serial-killer voice I seethed, “Can you not give me one minute to myself to watch Murder She Wrote?  I don’t have to live like this!”  Actually I was just thinking that last part.

Normal people understand that someone wearing earphones desires privacy.  Not only was I peeved that my family wasn’t normal, but also that the movie wasn’t as loud as it typically was, and turning up the volume barely helped.  I thought maybe the margarita I spilled on it may have frazzled some of my Mac’s motherfunction capabilities on its motherboard ram-cache.  I learned that in my COBALT programming class in college.

My daughter and her Friends That Won’t Leave entered the room.

“Hear what?” I said.  Oh, no, I must’ve mumbled out loud the virtual conversation I was having with Bradley.

“I can hear your computer!”

I fumbled with the earphone cord, noting that it was indeed plugged into the computer.

“OMG, I can’t believe I’m from this gene pool,” she muttered, trudging over to stick the connector all the way in.

Wow, that helped.  The Twitterati walked away, typing something.

Once I was on the phone with my husband.  Hubs was on a roll and pontificating.

He wouldn’t stop to listen to me.  He was actually talking over me.

He continued to rant as though I weren’t even there.  Covering the mouthpiece, I laughed and mouthed to my daughter and her FTWL, “He won’t let me get a word in edge-wise!”

Confused, she stared at me like that time I had APD (Acute Prozac Deficiency).  It took a while for me to realize I wasn’t on a call.  I had dialed voice mail and I was listening TO. A. MESSAGE.

The good news is that my therapist, Kendall Jackson, says that my brain brown-outs are due to my bi-polarness, not my age.  Maybe.  Or maybe too many margaritas have just short-circuited my motherfunctioning capabilities.

Posted by The Frazzled Mom at 10:08 AM No comments:

Please Resolve to Stop Annoying Me

Please Resolve to Stop Annoying Me

This year I’m not making New Years resolutions for myself.  Instead, I’ve decided to make resolutions for perpetually annoying people who bother the living Ryan Seacrest out of me.  From my kids to the self-absorbed lady at the hair salon, ya’ll need to shape up.

To my acquaintances:  No more Christmas cards with brag letters about your European exploits, about following your hunch on an archaeological dig in the Mediterranean and discovering Noah’s Ark, or mission trips to develop sustainable farming techniques in Cabo.  And you even met Bob Barker?  M’kay.

To cosmetic companies:  Don’t change the name of your make-up every three months.  When I have two minutes to run into Walgreens for “Surfin’ with Sandy Cheeks” blush, I want to be able to find that particular hue blindfolded for the rest of my life.  Those senior execs in the big corner offices couldn’t  comprehend the height of my consumer loyalty if I could find what I needed in ten seconds and have ”me” time to peruse “Celebrity Sluts” magazine.

To car dealerships:  Stop breaking stuff on my car when I bring it in for unrelated issues.  The blinkers started coming on randomly after I took it in for an oil leak.  And of course, now the gas tank door won’t pop open because I got a new tire.

To my kids:  Stop Instagramming pictures of our family on vacation so all the criminals know we are out of town.  Get OFF your phone!  And please refrain from telling dad everything I ask you not to.

To the obnoxious lady in the hair salon:  Stop bellowing about how you’re going to have bunion surgery.  “I won’t be able to walk and my daughter will have to go buy my Virginia Slims, but she’ll probably get the wrong brand because nobody cares about MY needs.”  That’s usually the point at which I pull out my flask disguised as a 20-ounce coffee cup which says, “Don’t ask me what’s in my cup and I won’t spread a nasty rumor about your STD.”

To the Austin Powers-looking kiosk barkers at the mall:  Do not shag, I mean snag, unsuspecting women, wrap aromatherapy hot pockets around their necks, and massage their shoulders like serial-creepers.  If I want a stranger’s hands on me, I’ll pay for it, thank you. 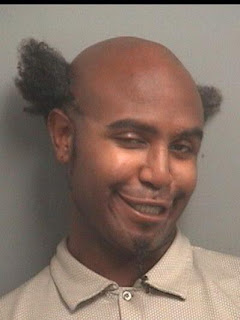 To my “Exercise” friends: Please don’t tout on Facebook that you competed in your tenth Iron Man triathlon and won the age bracket below yours.  I could brag that, through sheer will and determination, I’ve gone 22 days without eating a whole bag of Cheetos at one sitting, but I don’t scream that all over Facebook.

I’m getting into this, ya’ll.  Now I think I’ll shoot an email with some suggestions for New Years resolutions to Ryan Seacrest.
Posted by The Frazzled Mom at 3:52 PM 2 comments: