15 Things I Know For Sure

15 Things I Know For Sure

One of my personality flaws is that I can’t make decisions.  Choosing a picture for our Christmas card is just as hard for me as buying a car.

I can’t even decide on a bag of grapes because I doubt myself.  Green or purple?  Is that brown, damaged grape going to defile the other grapes it touches?  Should I buy the huge, toxic ones or the wimpy, organic ones?  The multitude of unknowns out there fuels my anxiety.

Writing a list of absolutes in life makes the world a little less scary for me.  Here are some things I Know For Sure.

If my snarky attitude takes me straight to the Devil, the PTA president will be driving me there.

You must seek cover when a redneck guy stands up and yells, “Hold my beer!  Ya'll watch this!”

Every December 1st, my husband says, “We need to send out the Christmas cards.”  Exactly who is “we”?  Hopefully the other half of “we” brings hot toddies.

When my husband and I travel, he plans the route and researches the weather.  Conversely I am only interested in staying at the hotel with free cookies.

One day I will change the sound of my car horn to a chainsaw, drive up close behind a biker in the middle of the road, and let ‘er rip on the egotistical jerkwad who thinks he owns any slice of the earth he occupies.  And my Anger Management class starts back up in the fall, since you ask.

One day when I’m buying a fifty-pound bag of Purina Dog Chow at Costco and someone in line asks me, “Oh, you have a dog?”  I’m going to say, “Nope, I’m doing the Dog Chow diet again.  Last time I lost 40 lbs, but wound up in the hospital.”  When they ask, “What happened?” I’ll say, “I stepped into the street to sniff a labrador’s rear, and I got hit by a car.”

Cats just do not care. 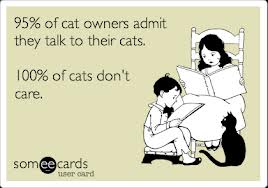 When threatening your teenager, whispering in her ear is scarier than yelling.

If you use “template” in any conversation, you automatically sound smarter.

When snow skiing, don’t trust your husband when he says, “Let’s take this shortcut.”

If you don’t challenge yourself, you’ll never realize what you can become.  I know that’s true because I read it on a sign at the dry cleaners.

There is no imaginable reason for me to use calculus in my daily life.  Schools are taking away dodgeball on playgrounds because it makes the fat kids feel bad.  What about me?  Why don’t they take away math?  That would make me feel better.

When you return a swimsuit at Macy’s, the sales clerk wonders if you tried it on with no underwear.

And, the number one Absolute of the Universe . . . the fifty-percent-off sale ended yesterday.

I hope meditating on these truths will ease the uncertainties in my readers’ lives.

Just knowing that I have a “template” for my Christmas cards next year eases my stress—giving me more time to maintain my blog, “Chaz Bono: A Great Actor Who Just Needs More Parts.”

Posted by The Frazzled Mom at 7:20 AM No comments:

At a wedding shower recently, the bride’s twenty-year-old cousin from New Jersey asked me a question that ruined my day:

“Do you have any grandchildren?”

“Do you have a stronger pair of Spanx?  ‘Cuz you’re bulging out of yours,” I didn’t say because I didn’t think of it.

“I’m definitely not old enough to have grandchildren!” I lied vehemently—just like I deny owning my David Hasselhoff “Knight Rider” Snuggie.

I wish I could’ve shot back with a clever remark, but I have CCM (Cerebellum Crispus Mortem), which is Latin for dead, crispy brain, in my case from overtanning with baby oil and iodine in the 70’s, I mean 80’s.

I’m plenty old enough to have grandkids right now, but my girls are only teenagers.  If they had popped out a baby already, I would’ve gone all O.J. and committed “Aggravated Decapitation of a Jerkwad Boyfriend.”  That’s a new, official category for violent crimes.

In the South, jerkwad boyfriends taking advantage of teenage daughters is considered “just cause” for decapitation. The penalty is a few hours of community service speaking to highschoolers about how heads could roll when minors mix Miller Lite with mini skirts.

My day was salvaged when I got to hold a three-month-old baby.  I smiled and reminisced as I stared down at her—and then I realized she was blurry.

That’s why God, in His wisdom, ordained that we women should stop procreating at middle-age.  Here are a few more of His reasons.

We’ve already burned our bridges with the elementary school principal, teachers, and the lady heading the school talent show.  Our kid would be on their hit list.

When we squat down with our toddlers to feed the ducks at the lake, the kid gets trampled by crazed mallards because our knees lock up, responding that they have better things to do.

When we wave goodbye to our son at pre-school, our bat-wings scare his friends.

In another fourteen years, when our teenage son says, “I’m gonna ‘hang out’ with Katie,” we’ll be too oblivious of current teen-speak to know it means “spend the weekend in Destin” with Katie.

We’re so exhausted we’d threaten our kids, “Go to sleep or you’re gonna wake up that monster under your bed.”

Impatient with a kid’s tantrum, we’d toss him a sippy cup of Benadryl.

When kids hit puberty, we won’t remember anything about the birds and the bees.

Kids might mistake the Viagra pills for blue M&M’s.

We won’t remember our Lamaze breathing techniques in the fitting room while our teenage daughters are trying on tiny bikinis.

I can’t wait to see the twenty-year-old at the Memphis wedding soon.  She needs to remember a few things—we’re in the South, I’ve got “just cause” for about everything, and I will jack her up, at least if my knees decide they don’t have anything better to do.

Wife Swap and a Passionate Encounter With Doritos

Wife Swap and a Passionate Encounter With Doritos


I love reality shows, and one of my favorites is Wife Swap.

Every episode two polar opposite families agree to swap wives for two weeks.

The first week the new mom has to adhere to her new family’s lifestyle.  The second week, they must abide by her rules.  In conclusion, everyone gathers for a “come to Jesus meeting” and a) agree they can learn something from one another or b) violently accuse the other family of being the spawn of Satan, which is lots funner.

I can imagine living with the flip side of my family.

The dad would wear a t-shirt emblazoned with, “Is that true or did you hear it on FOX News?”  And every morning the kids would say thank you when I toss them PopTarts as they’re walking out the door.

At night, I’d retire to my bedroom to have a passionate encounter with a bag of Ranch Doritos, which are always gone at my house.  And I’d go to the bathroom ALONE.

I’d finally read the other mom’s instruction manual, similar to the one I’d left for her at my house.  Actually, not similar at all.

With my luck, I’d get a real nut job family whose manual reads:

“We do not take our clothes to the cleaners because of the harmful plastic they put over the clothes.”  Oh, yay!  I suppose I get to eat vegan all week.

“We do not eat processed foods.”  As long as you have margarita ingredients.

I’d encourage ultra-competitiveness with my laid-back, polar opposite family who’d have a daughter who only cheers at school for FUN. (No cheer championships??  What a freak.)

I’d play Monopoly with them, and when I win, I’d strut around jeering, “Awwwww, does Daddy need a bailout?  How ‘bout I redistribute my Monopoly money?  NOT!”  And that would turn ugly when little Willow and Phoenix run to their rooms crying.  (J.K. I’m really SO politically correct)

I’m sure there’d be advantages to living with my bizarro family—like they’d probably have sports bottles that actually have lids.

But the experience would probably make me long for my panic-inducing, dysfunctional “reality show” at home.  After one week, I’d miss my angst-riddled teenagers who usually declare, “Mooooom, I can take care of myself!” and at other times whisper, “But I’m not so sure.”

Just like I still miss helping my two-year-old tiptoe along the balance beam at Little Gym and afterward, mothering her on my shoulder, her exhaustion exhaling softness on my neck.

And when they’re at college soon, I’ll miss soccer games and proms and catching the bouquet of their hair when I kiss them asleep every night.

But I shouldn’t worry about having an empty nest because I’m still having mondo fun cleaning jelly off the sofa and embarrassing them by singing "She's a very freaky girrrrrrllll, the kind you don't take home to muthaaa......" a la Rick James, when their friends are in the car.


Besides, I have a lot to look forward to—like having the Doritos all to myself.

Posted by The Frazzled Mom at 2:12 PM No comments: