1.  Watch you go to the bathroom
2.  Philosophy:  what’s mine is mine, what’s yours is mine, that which
you may want in the future is mine.
3.  You do not own them.
4.  Must have dirty paws all over the keyboard as you type
- or better yet, lay down on it.  Newspapers too.

5.  Choose not to come when called.
6.  If you want them to go anywhere, you must pick them up and
carry them.
7.  Act like dead weight when #6 occurs.
8.  Climb up on kitchen counters and eat other people's food.
9.  Look incredibly cute when asleep.
10.  Act surly and uncooperative when taking pictures of them.
11.  Have nine lives.
12.  Act totally unconcerned when caught creating a mess.
13.  Lap up water from the door of an open dishwasher


14.  Like big cardboard boxes.
15.  Have a fascination with toilet water.

16.  Don’t like wearing clothes.
17.  Like to ingest small items—preferably living, but may be recently
dead.
18.  Obsessed with Chuck E. Cheese commercials
19.  Go bat-crazy when vacuum cleaner is turned on.
20.  Like to eat goldfish.

Solving World Problems One Riblet Basket at a Time

Solving World Problems One Riblet Basket At a Time

This time of year many men get together with friends, building bromances watching basketball.

Unlike women, men in groups engage in competitions to determine their male superiority over the losers in their herd.  Men are very self-conscious about their manhood.  That’s why they must constantly check to see if it’s still there.

Studies show men talk to each other about four subjects: work, women, sports, and caulk.  And they’re concerned about things women find irrelevant.

For example, after I had lunch with a new friend Charlene, my husband asked me what her husband did for a living.  I looked at him like he’d just asked me who won the Heisman in 1970 (like I was even BORN then. . . Wooo hooo!  Wine just came out of my nose).

I shrugged.  “Seeing as how Charlene ordered a Mai Tai and was uneasy until she balanced the negative energy of her Riblet Basket, I presume he’s a feng shui love doctor.  Geez!  HOW the heck should I know?”

My sistah girls and I also meet occasionally to discuss Ryan Reynolds and other global issues—like if they’ve ever accidentally passed gas doing the Downward Dog.  Or if, while studying for a college exam, they’ve ever yelled out during Miami Vice, “Cuff me, Sonny Crockett!  I’ve been bad!”  Not that I’VE done that.

Reliable sources from Ripley’s Believe It Or Not! state that women speak three times more words per day than men.  And when together, females speak in a “stream of consciousness” manner about infinite topics.  The chemicals responsible for this are estrogen and sometimes tequilaphrine.

On a recent outing to Taco Loco, my friends and I verified Ripley’s theory.  We began discussing female speech patterns and continued in order:  male pattern baldness; Matt Lauer; why did they replace Ann Curry on The Today Show and is she three-quarters Asian; actually somebody heard she’s Thai, and in her native language, “Ann Curry” means “sum dum dip stik,” and why on earth would a mama name her baby that?

Then we talked about evil mamas; that heinous woman Casey Anthony and her poor little girl she smothercated; poor Honey Boo Boo and how her mama’s not doing her any favors either and are they really THAT redneck; how they ride four-wheelers through the woods and dumpster-dive; how somebody’s sister went into the woods once and saw a humongous snake and killed it with a nearby hoe—which brought us to Britney Spears.

Then it was cheese dip gives me gas; gas prices; Iraq; is Iraq close to Africa; isn’t that where Obama’s daddy’s from; why are women HORRIBLE at math; Obama’s daddy abandoned him and that was pretty “trashy”; and then Britney Spears.

Men and women socialize differently, but spending time with friends always results in clarity and a renewed sense of who they are.  I hope Ann Curry, being unemployed and all, makes time to Jazzercize with her peeps, Queen Latifah and Richard Simmons, and discovers a new sense of who she is—a smart, independent journalist who’s three-quarters Asian.  I wonder what the other half is.

Hello, I'm the Frazzled Mom, and I'm a Slacker

Hello, I’m the Frazzled Mom, and I’m a Slacker

I stopped making New Year’s Resolutions because I always end up breaking them.  I really need some self-discipline, but that means I’d get a reputation for efficiency and the Snarky Housewives of the PTA would put me on the fund-raising committee when I’m busy not going to all the meetings.

Here are a few of last year’s resolutions for which I showed little restraint and broke within a few days.

To those braggy chicks on Facebook who post, “OMG, I can’t fit into anything because my waist is so tiny since I started working out.  Life is so unfair!”  I’ll stop responding, “I know what you mean.  Bobbi Jean needed lunch money today, and I couldn’t give her any because all I had were hundreds.  I feel so guilty!”

I will once again try to stop drunk dialing Stephen Colbert and telling his assistant I’m Ann Coulter researching a story about GSA spending and I really need to talk to him about going with me to Las Vegas to prove if it’s actually possible to blow $800,000 partying in one night. 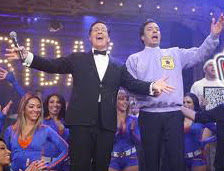 I vow to stop taking pictures of my Elf on the Shelf engaged in inappropriate activities, sending them to Will Farrell and signing Nancy Pelosi’s name, adding, “Buddy, I LOVE you.  Don’t go back to the North Pole.  Come live with me in MY Fantasyland.”  I see now that my actions were unacceptable and will comply with the court’s decision to revoke my Instagram.

I resolve to stop feeding my kids cans of french fried onions and take them to get a REAL dinner straight from the toaster oven ladies at Costco.

Stop writing letters to Fox News bashing Gretchen Carlson for saying years ago that 23-year-old Michael Phelps should be stripped of all his endorsements for smoking pot.   Gretch, pleeeeze.  You were Miss America in 1989.  Beauty queens in glass houses shouldn’t throw stones.  You can’t tell me you don’t have some nudie pics out there somewhere.

I will stop trying to beerboard the Homeowner’s Association president by taking her to Appleby’s, getting her drunk and extracting information about who that skank, Tiff, left with from the Neighborhood Scotch, I mean, Watch party.

I will stop my strategy to make ladies quit hogging the elliptical machines at the gym by telling them, “That guy by the mirror in the swim trunks and combat boots is on his way over here because he thinks you’re ‘purdy.’ “

After I drop the kids off at school for sports practice at 5:30, I resolve not to drive away yelling out the window, “Woo, it’s wine-thirty!”

God grant me the serenity to accept the things about myself I cannot change.  Maybe I should create a 12-Step Program for Slackers.
Posted by The Frazzled Mom at 1:54 PM 4 comments: