I was a room mom extraordinaire.

For Halloween, other moms brought cupcakes with a Milano-cookie tombstone sticking out of the top.  Pu-leeeze.

I brought a masterpiece with a lighted skull and glowing skeleton hands and feet that are supposed to stick up out of the ground, as if the fiend was clamoring up from the netherworld, except my skeleton was clamoring up out of a 48” x 48” cake grave.  Everyone raved about how did I do that and lots of stuff about how great I was. 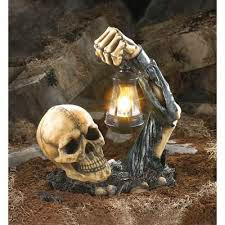 My all-or-nothing obsession began years ago when I was asked to create a centerpiece for the cookies-and-punch table at a school spring program. What an opportunity to show all the moms my insecurity, um . . . creative talent!

No sweet vase of crocuses for me.  Somehow I stumbled across a huge furry Bugs Bunny head that begged to be tablescaped.

My husband took over the household and child-rearing duties while I labored for weeks to make that head look like it was popping out of a grapevine rabbit hole.  I was like Evan Almighty building the ark, except with only one animal, and a lot less hairy.  Did I say this was a singing program for THREE. YEAR. OLDS?

Years later, I officially passed the punch ladle to others, and I never decorated for one freaking function again.

But lately my guilt over pretending I was always out of town on Scarecrow Day got the best of me.

Recently, while frantically delivering forgotten homework, I sprinted down the school hallway in my Tweety Bird t-shirt and sweatpants to avoid the gift wrap Nazi.  Just as I realized I’d left the house without a bra, the perky mom of the Senior Class suddenly appeared from behind a plant like Beetlejuice in Lilly Pulitzer.

“Cath, since every other mom has worked 12 shifts in the library and you . . . haven’t, will you decorate for the Senior Luau?  Thanks!”

“I’m sorry Deena Fay, I have a disorder,” I admitted.

“Nothing that a good plastic surgeon couldn’t fix,” she replied, staring at my chest.

“I am a craftaholic,” I said, ashamed.  When I fall off the wagon, my family doesn’t see me for long stretches of time.”

Like once, I went out for poster board, and weeks later they found me stowed away on a Disney Cruise, sitting in a corner by the Little Mermaid ice sculpture folding towels into animal shapes.

“You’ll have PLENTY of help,” said Deena Fay not listening, sort of like my kids.  “Like Charlene!”

“Charlene couldn’t even shine my shoes,” I thought smugly.  “However, she could fetch me my lattés.”

I wavered.  Visions of colorful tissue paper flowers and a tropical photo backdrop twisted me into Jekyll and Hyde dancing the Hula and serving up Pu-pu platters.

Suddenly, Deena Fay spun around and caught Charlene, herself, by the arm.

“I’ve been looking for you!” said Deena Fay.  “Could you decorate for the Senior Luau?  I asked Cathy, but she’s sick,” she said with her back to me and making circular motions with her finger at her temple.

Whatever.  Their loss.  I hope Charlene’s cheap blow-up pink flamingos look precious.  But maybe it’s best.  I’d probably blow my daughter’s college fund flying in fire-stick jugglers walking on hot coals—before Charlene could even shine my shoes.
Posted by The Frazzled Mom at 8:49 AM