"How can I impress upon you how much I REALLY don’t care?"

"LMMTC (Let me make this clear):  I am better/smarter/cooler than you."

Often hiss when you touch them.


"Sometimes I just go bat-crazy.  Mostly because everything bores me.  And because of  your incessant need to be up in my bizness."

Like for you to leave food out for them all the time.

“It doesn’t constitute an emergency unless it pertains to me.”

Could sleep 20 hours a day.

Like to sit on the kitchen counters and hoods of cars.

"You can touch me WHEN I want, WHERE I want, and to what DEGREE I want.  When I’m done, I will let you know."


Never know where they are.

When they do, they barely open their mouths.

Denial is their favorite pastime.


After breaking stuff, act like nothing is unusual when human slaves get home.

Wish they had thumbs/more thumbs.

"I am not sorry for what I (allegedly) did, and I have no regrets."

"If something unusual happens while you are gone, it is not my fault.  And I plan to do it again tomorrow."

Have incredible skills at things that won't make any money. 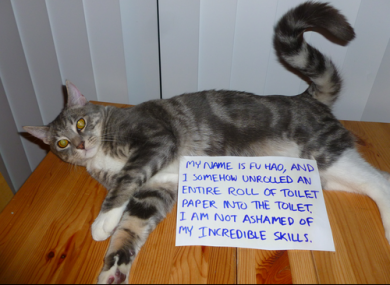 Will often pin you down and fart on your head.

Posted by The Frazzled Mom at 3:41 PM