The Magic of Ordinary 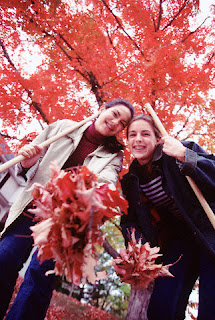 Last weekend, like good parents, Hubs and I mercilessly forced our female slaves to perform excessive and unnecessary yard work.

However,  the slaves have been known to report said parents to Child Protective Services if forbidden to watch Teen Nick on Saturday mornings.  Fine.  Hubs and I really don't want to deal with that again.

While they were engrossed in Spongebob, Hubs and I went out to tackle the ocean of fall leaves.  The girls were supposed to follow after  breakfast.

An hour passed and they hadn't moved so Hubs returned, gently yelling, “GET UP OFF YOUR FLIPPIN' CARCASSES!” in all caps.

Begrudgingly, he gave in, but the girls never appeared to help with chores.

Maybe this would take a little female ingenuity. I went inside and yelled, “Girls, what are ya’ll doing?”

Right.  And I’m wearing a thong.

Eldest crawled into a semi-upright Neanderthal stance and groaned.  The condemned inmates plodded out the door, sticking their phones in their waistbands.

“Why are they bringing phones?” Hubs asked me.

“Let them bring their phones outside.  Otherwise, they’ll be inside every five minutes checking them," I said, proving I am a female.  That way they could stay outside and at least LOOK busy, making their father happy.  A win-win.

After thirty minutes raking leaves into trash bags, Youngest went in for a drink.  Eldest waited there, rake in hand, reading her texts.

“Why are you busy not raking?” Dad sneered.

“She went inside.  You don’t expect me to do all this by myself, do you??”

“Here, I’ll help you,” he said.  Together they raked, bending down to bag the mountain of leaves.

As they worked, Eldest wasn’t thinking about what was really happening at that moment.  She thought she was just helping dad with chores on a fall day.  They were just raking.

She glanced over with a twinkle in her eye and tossed an armful of leaves in her dad’s face.  Before he could yell, she belly-laughed, and he pushed her over.  She went for his leg, and when he fell, she pounced.  Youngest bolted out of the house and jumped on his back. They stuffed leaves under his shirt and crushed them in his hair, and he cackled and held them upside down.  Their faces were red from the cold, and they relished the fun of 2-on-1. 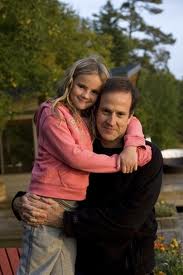 Later they burst in the house, and I was captivated by the faces of my teenagers, glowing with remnants of childhood, which are now often covered by the masks of Bored and Detached.

“Thanks for helping me, girls,” Dad said.

“Dad, why do you always bother us while we’re doing chores?  It takes twice as long to finish,” Eldest said, grinning up at him.

“Mom, we’re all muddy.  Here’s my phone,” Youngest said, pulling it out of her waistband.  “Take a picture of us.”

Small snapshots of Ordinary, like snatches of songs, that shade of blue, the wood handle of an old rake.  But years later the memories swirl together like leaves in blazing flutters of Long-ago and get stuck in a certain flannel shirt or in the salt and pepper of dad’s graying hair.

Posted by The Frazzled Mom at 4:58 PM