Halloween From the Eyes of a Parent

Happy Halloween everyone!
In between all the school parties, costumes, carving pumpkins, candy, and everything else you didn't get to, hope you can take a minute to read this—because it all goes so fast......

Halloween From the Eyes of a Parent

When my children were in pre-school, Halloween was a much-anticipated, momentous occasion. It was a night in which the young were free to imagine, to giggle and scream, and to be who they truly were, deep in their five-year-old hearts.
Back then my kids put great thought into their elaborate Halloween costumes. My daughter was enraptured by Cinderella, and we bought the Disney maiden’s shiny blue dress weeks before the big night. Of course, a blond wig and tiny glass (plastic) slippers were essential.
Every piece of her costume had to be perfect; but unfortunately, because she had modeled the get-up for her daddy several times, my showgirl forgot where she put the show-stopping shoes. They had to be somewhere in the house. After tearing our living quarters apart for a solid hour, I glanced at the china cabinet.
Lo and behold, the silicone slip-ons sparkled in the illuminated display, occupying a place of distinction beside my glimmering wedding china. She forgot she had stashed them there, secure from her baby sister’s grasp. She concluded that the logical hiding place was, of course, among the china. 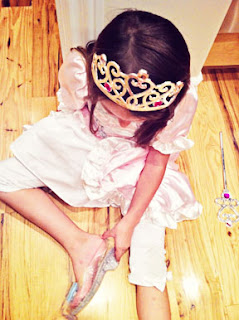 Where else would you put “glass” slippers?
As dusk approached on every All Hallows Eve, my husband and I spent grueling hours getting three kids ready, taking pictures, and simply striving for a photo in which no one was ogling at the camera with their nostrils against the lens. After I smoothed Cinderella’s hair and attached the last sash on my swashbuckler, my kids’ reality melted into a misty fantasy of fairy godmothers and fiery galleons on stormy seas.
Whether the night was clear or whether a perfect storm brewed, a magical, mystical electricity penetrated their rationality. It stirred them into a suspended disbelief that vampires morphed into bats and goblins greeted those who dared to approach a house with no porch lights on. They relished the paranormal pageantry under the aura of dim streetlights but within safe range of strong arms.
Each stage of life melted into the next, and this year I must reluctantly adapt again.  For the first time, my son won’t be home this Halloween to steal peanut butter cups from his sisters’ pillowcases of loot. And there will be one less flickering jack-o’-lantern lining our entry hall of horrors as a glowing memorial to each family member.
In May he walked across his high school stage and through the looking glass into another world. An adult world in which the roads are paved with promise and you have to pay for your own gas. On graduation day he donned his four-cornered tasseled hat and raised his treasured scroll. But my heart still pictures him donning his three-cornered pirate hat and raising his trusty scabbard. I turned around and a real five o’clock shadow replaced his black-marker mustache which was often eclipsed by a Gatorade one.
Back then, each scrape and scar had a salty story, and a damsel in distress beckoned around every corner. At age five, he strode out the door to chase his dragons, and just a few months ago, he strode out the door to chase his dreams in college.
May his ship be guided by the compass of faith, and may his gleaming sword slay every giant that stands in his way.
Through the years my little girl swirled into adolescence too. She traded her sparkly princess gown for a shimmery prom gown and now glides gracefully down the stairs in five-inch heels. 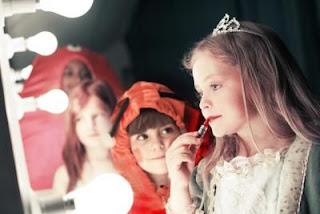 ehow.com
But I still see my Cinderella clack-clacking down the stairs in Barbie high heels, not bothered a bit that her crown slips precariously over one eye as she bounds over the last three steps. I cherished all the memories because I knew that in a moment her chubby little hands would clutch car keys instead of a candy pail.

lagliv.blogspot.com
Years before, she flew out the door to carve her jack-o’-lanterns. And pretty soon she’ll fly out the door, trying out her wings in a great big world, carving her own future.
May her every pumpkin turn into a gleaming coach, and may she find glass slippers in the most unexpected places.
Posted by The Frazzled Mom at 7:28 PM