I Was No Coppertone Girl

“Why These Kids Can’t Be Mine” day

I Was No Coppertone Girl 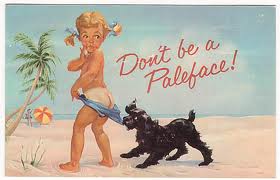 On fall break in Florida, I was surprised to see my daughter sitting on a beach chair covered from head to toe with a beach towel.

Now as I posted yesterday, teenage girls are obsessed with tans.  Wrath is spewed if someone blocks their sunlight resulting in an inferior degree of crispiness.

“I thought you wanted a tan?” I projected through the beach towel.

“I do.” (Of course, minimal information)

“Why are you covered up?” 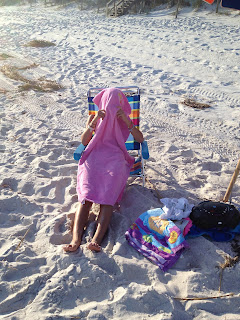 “Mom, how do you expect me to watch Gossip Girl on my phone when the sun is so bright I can’t see the screen.”

So I guess sometimes Gossip Girl trumps a tan.  I don’t know the rules anymore.

All I know is that when I was a teenager, tans were just as important as they are now. But I couldn’t go to a breezy beach at the drop of a hat so I “laid out,” as we called it, on a bath towel on the driveway.


Who remembers using this?

Just so you know, it was 1978, and baby oil was the potion of preference for the advance of the “Dark Arts.”  And according to the most recent U.S. data at the time, mixing it with iodine sped up the tanning process by 891%.  I mean, the U.S. was involved in a stagnant Cold War against the “evil empire,” but we were waaaayyy ahead of other countries in potions—like the Epidermal Crispus Mortem Potion, which is Latin for “potion for dead, crispy skin.”  By the way, literary journals agree that if you use “Cold War” and “Dark Arts” in the same paragraph, that’s really good writing.

Bottom line—before Mr. Coppertone, we got hotter when we “laid out” because we had no UV protection.

To distract us from the infernal heat, we used our dial-controlled, AM radio that was never exactly on the station and only had one antennae.  The static was so bad you could barely hear Andy Gibb’s falsetto.

My point is that it was BRUTAL.  Eight hours a day every summer until I was 16 and could get a job.

But the damage had already been done.  I am now 75,000% more likely to get skin cancer, but more importantly, wrinkles.  This is why I require so much maintenance now, cosmetically AND mentally.

According to reliable sources such as Cracker Barrel Magazine, long-term tanning with baby oil and iodine has been scientifically proven to diminish neutron activity in the brain.  I am proof of that.  I can’t remember anything, I repeat myself, and I say the first thing that comes to my mind, even if it’s vulgar.

But this is the “instant” generation.  Teens today don’t have the patience to brutalize themselves anymore like normal people.  However, I’m a little softer in my old age too.  Now when I’m on the beach, I embrace relaxation instead of pain.  Just give me shade, SPF 80, an umbrella drink, and a beach towel over my head so I can watch “Magic Mike.”
Posted by The Frazzled Mom at 8:40 PM