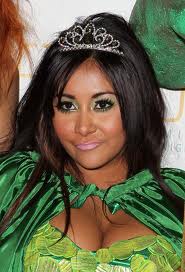 Many of our local teenage girls are members of a certain high school sorority.  In December, the girls in the sorority get to ask unsuspecting guys to a Winter Formal, at which the gentlemen must wear something other than gym shorts, comb their hair, buy a corsage, and take pictures at the pre-party house until all the moms with cameras pause their picture-snapping to pour themselves more wine.

Necessities for the girls are an awesome strapless dress which must reek of skank, hooker shoes, Spanx,  jewelry, a second or third piercing in her ears, manicure (possibly acrylic nails), pedicure, a professionally manipulated hairstyle, a makeover, a limo, pouty lips and most importantly, a fake tan, which may consist of spraying or lying under really hot lights, whichever is her preference.
The reason for this custom is that she must look good in the pictures.  If she stood between two friends at the prom and looked like the middle of an Oreo, her social swag factor would plunge like the economy under Obama, and you just might as well nail her coffin shut right now.

Many girls must wheedle, cajole, or negotiate with parents to finance a fake tan because many parents disagree with its necessity.

“I mean, I “get” the cartilage piercing, but a fake tan?  I don’t know, Ashley.  We didn’t do that before our proms.”

“Mom you didn’t have tanning salons back in the Dark Ages.”

“It seems as if you’d like to begin negotiations on the limo, which previously was a done deal, party girl.”

Young ladies have become very sophisticated in their arguments for the parental funding of orange skin, detailing its many advantages.  However, I believe the best argument is one in which the prom “eeeww-I-look-like-Michael-Jackson” girl describes to her mother in detail what will happen if she DOESN’T get a fake tan.

If I don’t get a fake tan, I won’t look good in the pictures.

If I don’t look good in the pictures, people will make fun of me.

If people make fun of me, I’ll have low self-esteem and make bad grades.

If I make bad grades, I won’t get into a good college.

If I don’t get into a good college, I will marry down and have six Honey Boo-Boo babies.

If I marry down and have Honey Boo-Boos, we’ll be poor and I’ll have a ratty car.

If I have a ratty car, it will stall near my trailer park.

If it stalls near my trailer park, I might get abducted.

If I get abducted, you’ll go broke because you’ll have to pay my ransom.

If you go broke, then you’ll have to live in my trailer and pay my rent because I lost my job when I was abducted for so long.

If you live in my trailer and pay my rent, you’ll go in debt.

If you go in debt, you’re going to have to drink boxed wine.

Posted by The Frazzled Mom at 4:04 PM